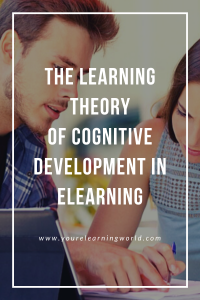 There has been an ongoing debate amongst educators about the role of memory versus intelligence in fostering effective learning. It has long been held that learners are more successful in retaining new content if they consciously think about what’s being taught, as opposed to simply memorizing what they see on the slides or on a computer screen.

The Learning Theory Of Cognitive Development: Principles And Applications In eLearning

The learning theory of cognitive development plays a huge role in the case of the former approach—understanding by thinking. Because of its very nature, where time and distance often separate instructors and learners, the cognitive process plays an even more important role in eLearning.

In this article, we’ll talk about Cognitivism and its application to eLearning design.

The learning theory of cognitive development is a theory in psychology, advanced by Jean Piaget, a Swiss developmental psychologist. At its very basic level, his theory explains the role that the human brain plays in helping learners understand new and complex concepts. According to Piaget, cognitive processes such as:

all play an important role in helping us learn.

What this means is that our ability to effectively absorb, understand, and apply certain concepts and theories is directly related to our cognitive abilities. For instance, if learners lack a span of attention, or can’t appropriately observe an instructor conducting a teaching activity, they are less likely to grasp the essence of what’s being taught or demonstrated.

eLearning And The Learning Theory Of Cognitive Development

So, what does this mean for eLearning instructors and online instructional content developers? Cognitivism has many implications for real-world eLearning and Instructional Design applications.

Because of time and distance constraints, eLearning instructors are not able to observe how learners interact with their learning environments. Therefore, Instructional Designers must ensure that the content developed is tailored to each learner’s cognitive ability.

A good example of this may be an application where eLearners are able to configure their dashboards or canvases based on certain preferences. Some learners respond well to graphical stimulus, while others become more attentive in a text-based or audio-visual environment. Allowing learners to “control” how lessons are presented will enable them to absorb content more effectively.

One of the cornerstones of Cognitivism is its focus on learning through self-discovery. What this tells eLearning course developers is that they shouldn’t over-weight their curriculums with content that “tells learners”; instead, content must be presented in a way that learners are forced to discover some aspects of the syllabus for themselves.

A great way to implement this concept in eLearning environments is by presenting the core concepts of a lesson in the form of high-level theories and learning points. Then, supplemental content that offers learners the opportunity to research and explore other elements on their own must be provided. This will allow them to form their own opinions about those core concepts laid out by the instructor.

Piaget believed that the cognitive process of learning was more important than the end result—which usually is to teach learners certain concepts or theories.

As eLearning content designers and course sponsors, we are often tempted to “test” learners at the end of each module or lesson using multiple-choice quizzes. While such binary testing has its place in learning, learners should also be evaluated on their reasoning skills behind the responses.

In doing so, eLearning instructors will get unique insights into the thought process that learners use to respond to the quizzes. That, in itself, will greatly influence a learner’s ability to understand and absorb the information being taught.

eLearning is sometimes synonymous with “compressed learning”. It’s often very easy to deliver a set of slide presentations or videos, followed by online quizzes. That way, one can quickly breeze through a course in record time. This format, however, robs learners of a very crucial element of cognitive learning—one that’s often touted as the biggest benefit of in-class teaching—interaction!

Behavioral theorists that subscribe to the learning theory of cognitive development hold that learners often learn more from each other than they do from an instructor rhyming-off bullet points. One way to enforce interactivity amongst online learners is to mandate group discussions and chat group participation as part of the overall course evaluation.

Because online learners often study at their own pace, it can add an element of boredom to the learning process. When learners aren’t motivated to learn, they tend not to use their cognitive abilities to the fullest.

The use of simulations, role-plays, and multi-player games are all excellent ways to foster interactivity among learners and challenge them to use more of their cognitive functions to learn new ideas and difficult concepts.

One of the greatest criticisms of Instructor-Led Training is its rigidity. Learners are forced to follow a pre-designed script that the instructor enforces. Cognitive learning turns that paradigm on its head and encourages eLearning course developers and Instructional Designers to cede “control” to the learner. One way to do that and make cognitive learning relevant in eLearning environments is to give individual learners the ability to configure personalized learning paths.

Cognitivism recognizes that not all learners have the same level of cognitive abilities. As a result, not every distance learner will progress at the same level. eLearning course designers should, therefore:

Because of varying levels of cognitive ability, we all learn differently. Cognitive learning can be made more relevant in eLearning by allowing learners access to different mediums of learning. Provide the main content in bullet points. Include additional clarification notes or annotations in the form of text, and append optional content (videos, audio files, and open-source content links) for individual learners to explore a subject further, should they wish to do so.

Since the heart of Cognitivism deals with how individuals use their brains to “think” about what they are learning, eLearning content developers must do everything possible to challenge learners’ minds to the fullest. That’s the only way to leverage the science behind cognitive learning, or “intelligent learning”, as it is sometimes called, and make it relevant in today’s eLearning environment.