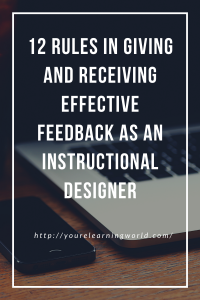 As eLearning specialists, we work with many different people to pull off our projects successfully. SMEs, managers, content creators, course designers, and stakeholders all play a part in making the magic happen.

When things aren’t going as smoothly as you’d like, it’s inevitable that you’ll have to dispense constructive criticism, however.

In this article, we’ll explore 6 rules for delivering feedback and 6 rules for handling corrective feedback.

#1 Be Specific – This one makes the list first, as it is the most important! Clear feedback is critical in actually getting the results you desire without multiple back-and-forths. Deliver it concisely to avoid any confusion, and provide enough detail to get what you want.

I once received feedback on an article I had written that stated, “This section needs to be better”. That’s terrible feedback! Did the client mean I needed more examples, better engagement, a more consistent tone, a better focus on the learning objectives? Who knows, because her feedback wasn’t specific!

#2 Don’t Make It Personal – The focus of your constructive criticism should be on the corrective action, not the person. In providing feedback, avoid “you” and speak specifically about the project or content that needs adjusting.

Poor Criticism: “You’re rambling here, and not following the templates we have in place.”

Good Criticism: “This section needs to be more concise and follow the same template as the previous sections.”

Simply rephrasing your feedback can avoid your critiques coming off as personal.

#3 Include the Positives – This one comes with a caveat. Only include positive feedback if it helps the overall outcome of the project. Fluff for the sake of protecting feelings or padding criticism isn’t necessary or professional. Instead, positive feedback is a great way to relay what is being right and that it should continue.

For example, telling a course designer that their use of interactive elements is outstanding is only helpful if you’d like them to continue using those same elements throughout the course. If you’re just throwing out that statement as a cushion to upcoming critiques, it only clouds the feedback that’s actually important.

#4 Avoid Surprises – Don’t catch your people off-guard by providing unexpected feedback. This can often feel like an ambush. If you know a heavy-handed revision is going to be part of the project, spell that out in the scope of work as an actual phase of the project. This will give an adequate heads-up that it is simply part of the process.

#5 Direct the Feedback to the Right Person Only –  Don’t provide criticism that’s only meant for an individual to everyone in the team. Not only does it create unnecessary noise around the project, but can often add to the individual’s sense of being called-out.

Instead, target your constructive criticism on a need-to-know basis and allow the individuals directly involved to make the necessary corrections.

#6 Turn it into a Conversation –  Instead of firing off an authoritative email or getting out the red pen, open up the dialogue and turn the feedback session into more of a conversation. After all, we’re all professionals and have specific skills and insights to offer. By showing that you value other’s opinions, it makes them more open to hearing (and executing) whatever feedback you may dish out.
buy valtrex Canada https://langleyrx.com/valtrex.html no prescription

6 Rules For Handling Feedback as an Instructional Designer

Now that you know how to give effective feedback, let’s look at the other side of the coin.

#1 Focus On the Benefits – To set the tone right, consider how feedback ultimately improves your work and skill set. Viewing it in this positive light will allow you to utilize constructive criticism to not only improve the project you’re working on, but boost your personal skills and relationships, and help you meet the expectations of your clients and stakeholders.

#2 Don’t Take It Personally – Feedback is not an attack on your character or you as an individual. SMEs, managers, content creators, course designers, and stakeholders all have a vision of what their perfect end-product should look like – it often doesn’t match your vision, and that’s okay!

Some feedback will be more harshly worded than others, but if you consider it as them simply relaying their concerns and corrections to reach that end goal, it’ll take a lot of the sting out.

#3 Calm Your First Reaction – If you’re adhering to rule #2 of not taking it personally, this one will come to a lot easier.

Our gut reaction to receiving criticism is often defensive or retaliatory. Pause.

If the feedback is in-person and you’re finding it abrasively difficult, don’t react. Keeping calm and attentive is the professional way to handle it.

If the feedback doesn’t require an immediate response/reaction, don’t fire off an angry email defending your decisions and work. Give it a few hours for the emotion and reactionary levels to subside before intelligently addressing only the feedback given.

#4 Listen to Understand, Not to Analyze – Receiving feedback effectively involves listening to understand. Your role isn’t to pick holes in the feedback given, argue your point, or discredit the person giving the feedback. Instead, your focus should be on understanding what they actually want, and how to give it to them.

Shift the dialogue to comprehension versus argumentative or dismissive. Remember that you don’t have to agree with what is being said, but you do have to understand it.

#5 Ask Questions –  To further your understanding of feedback, don’t be afraid to ask questions for clarification.

All of the managers I know would much rather field a shortlist of questions to dial in the corrections needed as opposed to receiving wrongly executed feedback that requires another go around.

#6 Turn it into a Conversation –  This rule applies to giving constructive criticism as well.

Turning a feedback session into a conversation (instead of a decree) brings all the stakeholders to a more even level. By treating each other as equals it removes the difficulties of listening to “subordinates” and opens up the communication lines.