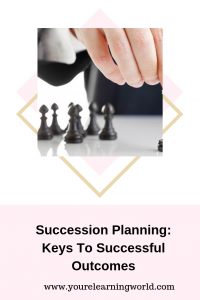 “…the process of identifying and developing potential future leaders or senior managers, as well as individuals to fill other business-critical positions, either in the short- or the long-term.”

It does not matter, therefore, which line of business you are in –government, education, health care, not-for-profit charity–, you need to plan for succession; because if you do not, there will be a leadership vacuum someday, and that could be disastrous for the organization!

The main objective of having a succession plan is that the organization is always prepared to fill in a      top-level executive vacancy – regardless of when or how it occurs.

Like the personalized succession planning processes alluded to earlier, the options available to prepare prospective candidates for succession are also varied. However, which options are preferred depends entirely upon the results of Step#4 in the planning process – gap analysis.

The function of the gap analysis is to identify the strengths and weaknesses of all of the candidates identified as potential successors. Most importantly, this step seeks to highlight significant gaps that future successors may have, in terms of training, skills, experience, personality traits and other factors, that may impede their ability to succeed in the new role.

Following a detailed review of the gap analysis, succession planners should be able to produce a personalized developmental plan for each potential successor. This personal plan may include any/all of the following components:

A key point to note here is that while training is a very crucial component of succession planning, it should not be the only option. Training, regardless of its intensity and comprehensiveness, can only prepare candidates to a certain degree.

Besides, most training programs give students theoretical preparedness, even if it is carried out in life-line simulated environments. Senior-level positions often require real-world, hands-on preparedness to guide the organization in the long run.

Therefore, in order to be truly effective, a good succession plan should consider several or all of the above options to fill gaps in a potential successor’s knowledge and skills.

Weighing The Need For Transparency

When deciding upon whether to be transparent about an organizations succession plans, corporate culture plays a big role. Often, in institutions with strict hierarchical structures, such as military, transparency is practiced on a “need to know” basis.

Democratic institutions, like charitable organizations, hospitals, and private companies might find that being transparent early in the succession cycle will be much more rewarding in the long run. However, succession planners must put appropriate mitigation strategies in place to address all of the cons (messaging, disgruntled employees, business continuity during transitions, risk of talent poaching) that arise from being transparent.