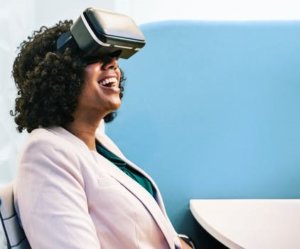 The traditional way of distance learning is all but over! No longer do learners want to watch animated PowerPoint slides or YouTube videos so they can grasp a subject. Increasingly, instructional designers are being challenged to come up with more relevant, and highly innovative content to not only challenge learners, but to also enhance their learning experiences.

Immersive Technologies – What are they?

You have been hired by a large company, that has staff around the world. The company has just created a prototype of their new electric engine, and you are commissioned to develop a course on how to disassemble and re-assemble the equipment. There’s just one prototype, and there are 300 employees across the globe that need to get “hands on” training on the device before it starts mass production.

How do you train a workforce so dispersed, and with such an obvious challenge?

The answer: By using a combination of immersive technologies to create life-like training content!

Unlike traditional slides and videos, immersive eLearning technologies are designed to address real-world teaching challenges.  From brain surgery to the handling of highly explosive and toxic chemical substances, these technologies are being deployed in real-life applications to deliver the most realistic of learning experiences to learners around the globe.

So, what are the characteristics of immersive technologies which can make them so endearing in the learning environment?

Going back to our hypothetical scenario, one way to leverage immersive technologies in solving our training challenge would be to create a course that would let each trainee-employee “access” the prototype engine virtually – perhaps as a hologram:

The ultimate objective of immersive technologies is to make learning an experience, as opposed to a mundane process. By forcing immersion by the learners, these learning technologies ensure that learners are as real-world ready as the content allows them to be.

Here are some common immersive technologies that you are sure to encounter more frequently in the eLearning world:

VR is a technology that creates computer-generated, 3-dimensional settings that are based on targeted real-life environments. Using devices, such as 3D goggles and surround-sound-enabled headsets, learners get deeply immersed into the lessons being taught.

VR allows learners to make mistakes “on the fly”, without too much cost (e.g.: a one-of-a -kind prototype does not break; or a patient doesn’t have to die), while also allowing them to learn from their mistakes.

AR takes VR just a step further. It uses the same learning principles of VR, but then super-imposes a specific real-life situation into the mix, forcing learners to function as if they are performing in that reality:

By augmenting the learning environment, to mimic closely what the learner will face in real life, AR training content elicits distinct auditory, visual, and sensory responses that learners will likely deal with when they enter their chosen field of specialization.

Mixing It Up a Bit!

Technologies, such as Microsoft’s HoloLense, use multiple sensors and advanced optics to create highly interactive learning content. For instance, using mixed reality learning content, in our aircraft engine scenario, the learner could use his/her sensors and other devices to spin the engine around, flip it over, or turn it on its sides to get a closer look at various components in it.

The training world of VR, AR, and MR is going to be vastly different from the 2D training world we now know. Not only will these immersive technologies help learners grasp complex content faster; they’ll also allow the technology itself to learn from a learner’s mistakes, thereby offering a much more interactive and productive learning experience.